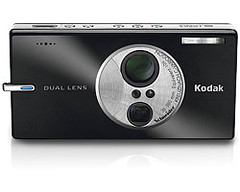 Kodak V610
Originally uploaded by gadget.
In the 1980's I had a dark room where I would enlarge and develop 35MM prints taken with my SLR camera. To this day I have boxes and boxes of negatives from shots around the world, taken over several decades. Unfortunately, I have no way to sort or search these effectively. When Kodak released their first, and archaic with no flash, Digital Science consumer camera in the late 1990's I instantly jumped into a new revolution. Now I could name my photos and have them searchable and pulled up instantly on my PC. Back in the days when the internal camera memory could only hold 16 to 30 photos, naming them was a trivial process. Nearly 10 years later, my current camera sees 512MB and 1GB SD cards, and holding hundreds of photos on a single card. Naming them becomes an impossible task. Picasa does a decent job with importing them and letting me name and create folders, but I still wish for photo specific naming based upon a location where they were shot, which is typically how I like to organize photos. Expensive SLR cameras have GPS connection options, but these are mainly used for insurance company or survey applications where precise location is important. I just need to take the latitude and longitude numbers, bounce them off a database to determine a city or street name and name the image file accordingly. This would seem to be a relatively simple consumer application. Today, it does not exist. The closest thing, Riya.com uses logic to scan photos for faces it recognizes, after you initially name them, or the text of a street sign to automate the indexing. This is great for people but is not for every shot or location that you take. It will be many years before object recognition software could identify a building and map it back to a location.

New in their spring lineup for 2006, the Kodak V610 dual lens camera has a 10X optical zoom, a 2.8" LCD and 6.1 mega pixel CCD along with a Bluetooth radio inside its svelte chassis. This yet-to-be seen Bluetooth option is used to transfer images from your camera to your PC, but this would be an extremely tedious process for a six-mega pixel image with their large file size. A better application, and one mentioned as feasible by Jens Hinrichsen, a Kodak marketing manager, would involve a "pull" operation rather than a "push" or output operation. Since every mobile phone in America is mandated to have location information for Emergency 911 calling, the camera could request a data transfer of the last know coordinates form the phone and place them within pre-existing EXIF data fields for lat/longitude location information. Now this would require a firmware upgrade to the camera to modify the object push control and add a software button or two to request the location manually, but that's not the hard part. Carriers, especially Verizon, have crippled the mobile phone "standard" Bluetooth stack to only allow headset and hands free profiles. Exchanging photos just as Kodak mentions on their web site is not even supported on the majority of handsets. Using the mobile phone as an inexpensive GPS receiver to give you location data is out of the question.

Listen up carriers, quit crippling the Bluetooth stack in our mobile phones to allow features, such as this, that benefit your consumers!