Calacanis and Arrington Pups at TC50 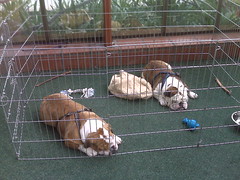 Calacanis Pups at TC50
Originally uploaded by gadgetgy.
Last week had non-stop events in San Francisco, TechCrunch 50 (TC50), Apple's Lets Rock announcement and CTIA took my days, and the parties took over the nights. The dust has settled this week and I wanted to share my thoughts of the event. I saw a lot of stuff, and below is a sample of the good and bad that resonated with me.

On the first day of TC50, there was no wireless Internet access, which I actually liked. Having been to events with full-speed unadulterated Internet access like Demo, a few Gnomedexes and the Web2.0 conferences, and actually presenting at many events, it is quite annoying to speak at people gazing into their laptops. While many are tweeting your moments of awesomeness (like twitter.com/dacort/statuses/896814882 this) it's hard to have a connection with your audience when a laptop acts as a physical wall in front of your would-be engaged audience. Thankfully, a bit of off the cuff humor or a quick roll through a slide deck (as performed by Jeremy Toeman bugblogger.com/author/jeremy-toeman/) can force people to be engaged.

After a slow (read boring) start from Ashton Kutcher and his www.BlahGirls.com site - which I thought was for kids, but it's PG-13, the content at TC50 became more and more interesting. It was cool to see Marissa Mayer show Google's indexing (read scanning) of newspapers and the Optical Character Recognition (OCR) and hot-linking on their scans of the printed page. You can read about the Archived Search paper project here: news.google.com/archivesearch/partner.html

I thought Yammer - www.yammer.com/ which is twitter for corporations was as pointless as twitter for consumers (disclosure: I reluctantly tweet myself) and could kill productivity faster than corporate instant messaging and email already do. The "only when necessary consumer" in me loved the idea of OpenTrace - opentrace.org/ which is a way to see the environmental impact that a product has from its creation. Microsoft's Marc Smith tried this with bar code reading Pocket PC's back in the days of Aura (now closed) but it never "really" launched.

I can't believe that OtherInbox.com got such a great response considering their methods are obvious to tech-know-how-folk who run their own domains, or one of the 26 million people who use gmail. You see, those of us with our own domain, like www.davemathews.com can create a "wildcard" address scheme where anythingyouwrite at davemathews.com can come to one in-box. If someone (like Hertz Gold membership in my case) had their database of email addresses hijacked, I could turn off the address that I used by pointing it at a "blacklisted" or spam name that was created later. Gmail users can add a +uniquename to their gmail user name (before the @ sign - like [email protected] and you can see who is spamming you, and create a filter to move them away from your inbox. I do like their ability for them to automatically "folder" a "user name" so you can send everything for your "[email protected]" and have a single click of a folder to see your flights, hotels or tickets easily. Their truly unique feature is a daily "snapshot" that they can send to your primary email address, to let you know what came into your other inbox that day. Think of it as a peep-hole to see if you need to check that other box. That is smart.

It seems as the stuff going on at Demo day one was more interesting to me than the TC50 day one. But that changed on day two the TC50. Unfortunately I was not able to attend either of those conferences as the G4 network had me cover the Apple Lets Rock event. Which was interesting, albeit evolutionary, not revolutionary. You can catch the fun that we had over there; here: www.telepixels.com/2008/09/ipod-nano-4g-and-itouch-2-along-with.html

Even though I wasn't present for their pitch, I did order the gadget from www.fitbit.com - I am more interested about what this will do to register my (lack of?) sleeping patterns than how far I run around the city during the day. Lets hope this hardware gets open sourced for other modules and capabilities. I also watched the demo from www.Tonchidot.com in awe. Their software uses GPS and WiFi location sniffing to overlay user submitted data on the top of video seen by the iPhone camera. Although it is a demo and may prove to be difficult to execute in the real world, it showed augmented reality - something that I worked on and dreamed of when I developed the CueCat barcode reader. Theirs was in a 3D space, which made it almost magical. Lets hope they create a database structure that can live up to its promise, without being too ambiguous. The guys from T9, the global standard in "touch once" texting software for numeric (read: non smart) mobile phones showed their Swype text input for touch screens. You can run this software on your Windows mobile device, by going to www.forwordinput.com if you still use one of those phones. Yeah, I didn't think so.

On Wednesday the Internet was flowing through the TC50 air at the pace of the drip on that sink that you always meant to fix. Twitters mobile site worked well; on your laptop. And that was good enough for me. I was most interested in www.TrueCar.com which uses actual sales data from lenders, insurance companies and god knows who else to tell you what others are paying for their new automobiles. This is an interesting service as the automotive business is never as cut and dry as you would expect a commodity product to be. Caveat Emptor!

The guys from www.bojam.com showed a collaborative music site, like Apple's Garage Band but with a Web 2.0 user generated flair. You can upload your own beats, loops or tracks and let other musicians contribute to a final song, or use your beats in theirs. What happened to musicians finding each other on Craigs List? This site tears down geographical boundaries, which should give an interesting spin to concerts. I can just see it now, a live conference concert via iChat!

Back on the "what's old is new" tip, www.GoodGuide.com gives users access to health and other environmental impacts that products have and reports them to consumers. Again this is a take on Microsoft Aura in a Web 2.0 world. Oh, and a bar code will trigger a users input from a mobile phone in the near future - how novel. With 61,000 entries so far, and 200 data sources polled for information on these products, it may just help you to buy something that is "greener" than not, if you stop and take the time to check.

So there you have it. A quick look at the TechCrunch 50 presenters that I found interesting and gauche. By the way, as much as I didn't think so upon my seeing them online, the Calacanis and Arrington dogs were kind of cute in person. Name badges and all...
techcrunch tc50 techcrunch50 2008 demo conference dogs