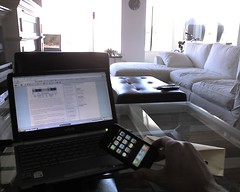 Since I get called upon as a guest expert by the media in the consumer electronic space, I am going to make an effort to share the outlet details here so that you can tune into the net streams....

On Saturday, July 28th '07, I'll be making a second audible appearance on WCCO Radio's Esma Murphy show at 10:10 Central time. Last time we spoke about the iPhone where I weighed in on my opinion that "Americans love tactile feedback" and do not want to look at their thumbs on a screen in order to type. We will do some follow-up on that topic, as a few of the originally heavy users of the iPhone have grown less enamored by the $600 device and are longing for the "clickity click" of their Blackberries.

Don't get me wrong as this keyboard is truly revolutionary in nature - it auto-heals or picks the correct letter that it thinks you mean to type via a real-time dictionary; It can remove buttons that are not needed depending upon the field you are typing in - for example, the space bar is converted into www, "/" and .com during input of URL's; finally as you type, letters "rise up" out of the on-screen keyboard area to above your thumbs to show you what key was registered. The only lacking feature that kept me away was a way for my thumbs to "know" where they were. Even with the virtual click of the speaker, which is a nice way to audibly recognize input, it lacks that "touch factor" that Americans love about buttons. As a feature, what if you could choose between clicks of the speaker or mini-vibrations of the silent ringer alert? Could this benefit from a type of haptic response? Sounds novel and interesting to me!

For the Saturday radio show, also on deck is a chat about sub $500 laptops and what can you get for that bargain price. Back to school season is coming in a week or two and notebooks are cheaper, and of course more powerful than ever. They are also heavy in this price point, at around 6 pounds, so paying a little more saves you a pound or two. Most people keep their laptops plugged in at home anyway...

If you want to hear more, tune into http://www.wccoradio.com/ on July 28th at 10:10pm in the central time zone.