November 21, 2019
Welcome to the reboot of Tech Talkback, I’m Dave Mathews and this is the text version of the Podcast on the 2021 Mustang Mach-E from November 20, 2019.  Tech Talkback on Anchor Free and Spotify Podcasts

Ford galloped into the LA Auto show with their new fully electric vehicle this week, a day before it opened and some of the automotive press isn’t too happy with it.  Are you? 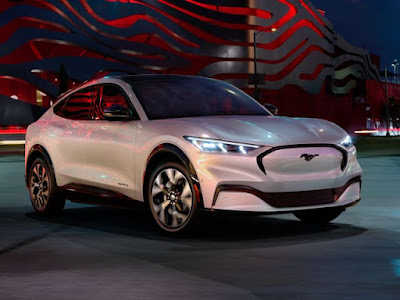 Called the Mustang Mach-E, which is a throw-back to the summer of ’69 Mach 1 muscle car.  It was designed at the Dearborn product development center, just as the Ford GT supercar was.

What lead to this upsetting or at least somewhat confusing branding exercise?  It was due to Ford’s President of New Business, Jim Farly, asking the team behind the skunkworks battery driven "compliance car" to hit government fuel economy targets (rumored to be the replacement for the Fusion) to re-imagine their product offering.

This in light of the Tesla and Porsche Taycan performance-oriented vehicles that early automotive-adopters are purchasing in the marketplace.  Tesla proved with their first-generation car, the Roadster, then their super-quick “plaid mode” on the S and 3 dual drive models and in their future 2020 Roadster that zero-to-60 times really do matter and Ford took notice.

This is the first time since the Mustang’s debut in 1964 ½, after 55 years and 10-million galloping horses later for the brand, that it will be available as a 4-door.  Considering that Ford is dropping passenger cars, except possibly the "Legacy Mustang" in 2022 to solely produce SUVs, it makes sense to reboot the “new legacy” of the Mustang brand. 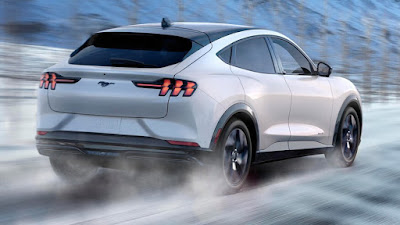 In my opinion, this vehicle is really going to hurt the Jaguar I-Pace sales, and may be what drives the nail into that SUV’s coffin.  Jaguar dealer incentives have grown from $5,000 to $15,000 discounts on top of the federal $7,500 tax break rebate.  The marketing is confusing as well with the electric I-Pace, performance F-Pace and basic E-Pace taking Jaguar product marketing.

Did you know that the Ford trademarked blue oval and the name Mustang do not adorn these vehicles?  Ford figures they don’t have to as the style is iconic as they come.  The Mustang logo replaces their blue oval.

But the reboot of the legacy name isn’t sitting lightly with car aficionados.  Jimmy Dinsmore, co-writer of Mustang by Design, started a petition which has around 1000 signatures asking for Ford to re-think their naming convention.  With the 2020 Internal Combustion Engine or classic ICE Mustang pushing 700 HP in their top performance supercharged model, is it the end of an era, or will the Mustang have two models in 2021?  A smart and pseudo-rich man with around $100k spending money would buy the last of the old and the first of the new, and drive them sparingly.

The solely electronic version of the ‘Stang is getting further automotive press heat for pushing artificial sci-fi-V8 sounds into the cockpit during acceleration.  Sounds a little George Jetson to me, but BMW, Mercedes and even Porsche have been doing this trick to their combustion engines over the last few years.  Now it is due to the addition of turbos and muffled exhaust tone muting from particular filters that the EPA and the European equivalent are requiring on ICE exhaust systems.  So, the ICE noises are not a specific true innovation.  It’s the first Mustang without door handles too, as a push button pops solenoids in the doors to unlatch them, which is a trick that GM has been doing with the sporty two-door Cadillacs and the Corvette for years.

This hasn’t been the first attack on the Mustang brand, in the 1990’s it was almost made a front wheel drive on the Mazda platform, but fortunately for society, that became the Ford Probe. 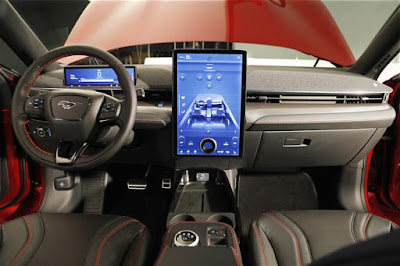 With cars becoming your largest technology “wearable” the Mustang has more tech features than you can shake a smartphone at.  Two screens, first of which is a 10.2” widescreen in front of the steering wheel for vehicle operational details. Next, a 15.5” horizontal display “ala-Tesla” with their latest version of Sync-4, which derived from their partnership with Microsoft.  This is constantly displaying air conditioning, media and other cabin comforts from tiles that can be shuffled around the display without the need for a home or back button.

For your sanity and muscle memory, a single rotary knob is at the base of the screen for quickly turning down or cranking the sounds from your digitally-delivered services.  It’s also got an Alexa inspired “Ok Ford” voice capability if you like talking to your whip.

The new Mach E starts at $43,850 for the rear wheel drive crossover and if you’re one of Fords first 200-thousand buyers, you can take advantage of American’s $7,500 tax incentive.  The first models are available late 2020 with performance GT models coming in 2021 at the starting price of $65,000.

The performance model’s 0-60 times hit 4 seconds with an equivalent 459 Horsepower while the base model is 255 HP equivalent and doesn’t bury your head in the seat upon take-off.

A standard 75.7-kilowatt liquid-cooled battery from LG Chem can be boosted to a 98.8-kilowatt model varying the range between 250-300 miles, besting that of Tesla, with a rear-wheel drive model getting slightly more mileage than the all-wheel drive model.

Charging with a 150-kilowatt charger gives you 47 miles of range after 10 minutes.  At home, charging will take place slowly overnight, vs the fast charging through the 12,000 chargers of Electrify America, Volkswagen’s gift after the diesel emissions scandal. 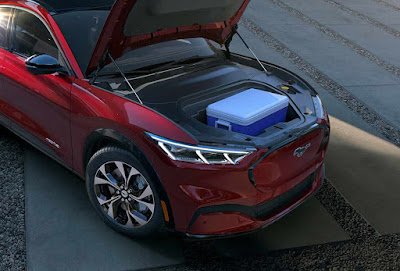 The original mustang was a 2+2 and this one adds a seat as it fits 5 adults with no 3rd row back seat.  It has 29 cubic feet of storage space, which bests the Audi E-Tron and i-Pace plus a nearly-5 cubic foot “frunk” with a water drain for a cooler option, un-like your dream Porsche.

You can put your $500 deposit on a Mustang Mach-E on the Ford website, and let us know if you were on the fence about a Tesla, or if you previously owned a Tesla and want to drive the legacy brand of the Ford oval.  With Tesla’s assembly line inconstancies, and BMW’s i-series body quirks, this should be a top-performer at retail.  It has the shark-nosed front end of a crossover, sculpted bodyside lines of a BWM X series and the familiar taillights of the Mustang of yesteryear, albeit a bit higher.

Best of all, the Mach-E will receive its updates overnight, via cellular data connections and we should hope for technology and performance improvements that Elon Musk has made standard over on the Tesla platform.

Kevin Nelson said…
Ford is offering a host of driver-assistance features, but few are standard. More features will be available as buyers walk up through the F-150's six trim levels, including a rear-facing camera for monitoring a trailer while on the go. Learn more about Ford Explorer - rustyeckford.com
7:37 AM