November 30, 2019
I’m Dave Mathews and this is the text version of the Podcast on the 2021 Tesla Cybertruck from November 30, 2019. Tech Talkback on Anchor Free and Spotify Podcasts

What looks like a cross between a 70’s Lotus and a door-stop, its construction was inspired by the DeLorean and has fender flares from the Lamborghini LM002, oh and probably makes a Humvee cringe in fear?
It’s Elon Musk’s latest foray into the electric car, I mean truck market, and it’s called the Cybertruck.  Elon says this physically hauls more than a F-150 and preverbally hauls in a zero-to sixty time which bests a 911.
He even towed a F-150 sliding in reverse (under its own power attempting to go forward) in a promotional stunt, which was an easy traction vs torque feat due to the heavier chassis on a Cybertruck than the F-150’s aluminum & lack of battery mass.  Look for a rematch on this towing feat soon according to Elon’s Twitter comments. 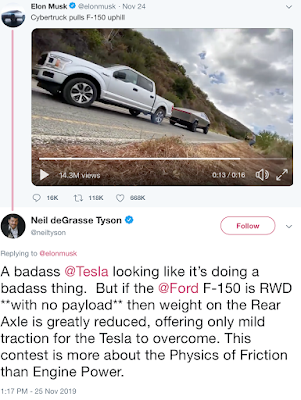 The weekend after the Cybertruck launch, we learned that nearly 150,000 people (now 250,000 post-Thanksgiving) a dozen of which were my friends on social media, paid a refundable $100 deposit on their own Cybertruck driving dream. 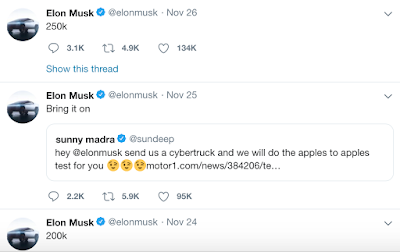 Last week on Tech Talkback we covered the new Mustang Mach-E sport-SUV, which sold out its first editions a number unknown, but is some number of their first year battery material imposed maximum of 50,000 units.

Back to Elon, who at a recent Space-X event said “I love stainless steel” showing his massive rocket a month before the truck appearance.  It too is built from a cold-rolled, stainless-steel, impact resistant body, to which they literally took aim at its strength as well as the number one selling truck in America, by banging a sledgehammer against its steel plus a Ford aluminum door.  We don’t need to tell you which faired the demonstration attack for the better.  Speaking of its body, there is a single body line of metal between the cab and the bed like the original Honda trucks and an old school “Merrican” El-Camino.  No bed gaps and probably no independent frame on this one. 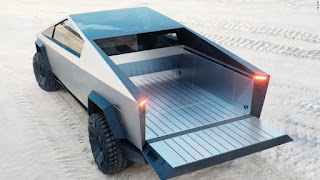 The truck has a range of 250 estimated miles on the one motor version debuting in 2021 and a second and third motor with up to 500 miles coming to us in 2022.  Pricing starts at just under $40,000 and goes up to $70,000 with options.  Oh, and what benefits do you get with that expensive one?  It hits 0-60 in 2.9 seconds.  Speaking of options, Elon says that 12 more features that we don’t know about will adorn the truck at launch, sort of his Steve Jobs “one more thing” times-twelve.  Hopefully some off-road derivative of Plaid, like pulsing the motors to hop the truck to get it out of a sticky situation.  Wait, Mercedes took that thunder with their long-awaited remake of the G-Wagon. 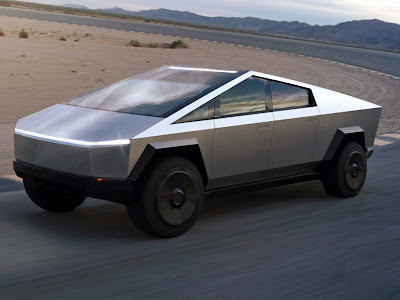 Like all Tesla vehicles, you have to pay $7-grand to add the self-driving features, even before they launch, which we still don’t know when that will be, or how automatically sophisticated the system will be.

Like the original Hummer H1, Tesla has an integrated air compressor to fill up your tires and toys as well as the air suspension once you lower the vehicle up to 4 inches to drive your ATV or motorcycle up the built-in tail-gate ramp.  An A/C inverter is included to power stuff like tools and laptops when you’re not hauling things too.  Oh, a rolling bed-cover keeps a massive 100 cubic feet of your junk private, which you can even dance on when it’s closed.  Take that tonneau cover.
While there are plenty of E-SUV’s from Audi, Mercedes and Tesla, the electric truck market is still not-yet shipping vehicles.  Ford towed a train in the Summer of 2019 with their electric F150, while proving electric’s capabilities to existing truck owners riding along in the cab who were befuddled and somewhat inspired by the automotive giant’s achievement, electrically that is.

Other trucks and vans are on the way.  Newcomer Bollinger motors and Rivian, who took investment of $700 million from Amazon, for the delivery van they are building for them, along with Ford Motors who invested $500 million for an assumed Lincoln SUV platform.  Bollinger’s truck goes for $125-thousand dollars, will carry 5000 pounds and drive 200 miles, that range, incidentally, is probably without the load.
Tesla calls their truck, and I quote “the most powerful tool that they’ve ever built,” as it tows 14,000 pounds, and carries 3500 pounds, but it wasn’t the first Tesla truck we’ve seen.  That accolade goes to enthusiasts that converted Model 3’s into El-Camino equivalents.  Check the Youtubes for Simone’s Truckula hack with friends.

Tesla’s self-called "tool" towers above other vehicles with its air suspension filled on the road, and seats 6 people in two rows.  It’s just over 231 inches long, nearly 80 inches wide, and is 75 inches tall with a 6 ½ foot long bed.  While I won’t be a first purchaser of this, I can’t wait for my friends to show me their looks into the future.
Tell us what you think below, and stay tuned for our next episode on the e-SUVs that came out of the 2019 LA auto show.

Greg Lewis said…
The multi-function tailgate option on the 2020 Ram 1500 allows for increased convenience when loading, as the two doors swing both vertically and horizontally. turnersvillejeep.com
10:33 AM

Joseph said…
Visiting as many job boards as possible will allow you to find a best truck driving job, and find the best position in the shortest time frame possible.
1:54 PM